In this whole recession environment, every country is looking for an alternative power and fuel energy sources. Some countries are producing electricity by the formal wind energy, and some are using the solar power. Solar powered mobile phones, and solar powered cars are made to reduce fuel consumption. A small town in UK has transformed the way they used to collect garbage. They run the garbage collection vans by the garbage they collect. This is really an interesting story as this can change the whole way we look at garbage thrown out from our houses. The garbage is recycled to produce electric energy to power up the van’s batteries

[ad#ad-taalz-inpost-right]The van is actually a Smith Edison modified 3.5 Tonne Transit with a 40KWh lithium ion battery. Not only this the whole garbage system has been changed to make this really happen. New garbage boxes have been added up in 25 different stops, at which people used to throw away their garbage. Its called the garbage split, with two options to throw off your garbage: number one is the litter section and the second one is for cans,papers and plastic. This has been done so that it would be easy to recycle the garbage the van collect.

The top speed that this electric van gets is 50mph with a range of 100miles and a continuous run of 6-8 hours.The trash taken from the splits is then taken to the power station-come-recycle center and then there after burning the trash the energy is produced and the van gets its batteries pumped up. 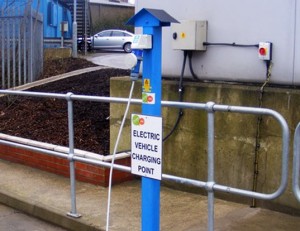 Not only this, the recycle station provides almost 12MW of energy to the local stations so that other people can participate more in this revolutionary system, so far which is going well.