Nokia is coming back into the news again and the most rumored smartphone has finally made its way through. A colorful Nokia N9 is equipped with 1GHz Cortex A8 CP and has a PowerVR SGX530 GPU. The rumors were about its QWERTY keypad too but unfortunately it does not have it. The most interesting thing about N9 is the colorful look of it’s back-panel. Read more to see the pictures of Nokia N9. 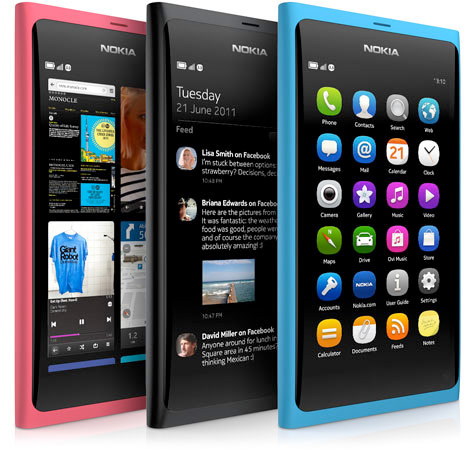 A totally button-less Nokia’s first mobile phone which is totally changed from the traditional features.  A 3.9 inches 854 x 480 AMOLED capacitive touchscreen with 16 million colors.  The best part is, it has the Gorilla Glass screen too, which is scratch-less and kind of unbreakable. I said “kind of unbreakable” because in the last post I showed the broken Samsung Galaxy S gorilla glass screen.

Nokia N9 has an 8-megapixel camera with auto-focus and aperture F2.2 which is very good for a phone to take pictures in low light. Video recording is of 720p HD @30fps. Carl Zeiss optic lens make the pictures look sharp and gives a very good result. Dual LED flash light makes it possible for you to take photos in dark. You can record the video in 720p but there is no HDMI output port, so it means you can only have the output via microUSB v2.0 – Yes! it has TV Out but using the simple USB.

This new smartphone is Nokia’s first 1GHz processor phone, TI OMAP 3630 chipset and 1GHz Cortex A8 CPU with PowerVR SGX530 GPU making the graphics smooth and adorable. It comes in 16GB and 64GB versions and has 1GB Ram. There’s no card slot, so you only have the internal memory. It is available in three colors, cyan, black and Magenta. Unfortunately and to my surprise N9 does not has a Radio, though there are quite less people who listen to radio on smartphone but still if you have it, its not bad.