Are you too lazy to use iPod’s navigation wheel? Then lets talk to your iPod. iPod is such a useful gadget and for sure its the most used out gadget to listen music. The touch wheel navigation of the iPod is surely a cool thing but sometimes you are just so lazy to do the moving or you may have something on, like gloves in a cold winter day. Accenda iPod voice controller is just the right accessory for those who want to use the iPod with ease by giving it voice commands. It is an add-on accessory for iPod which let you talk to your iPod to control the navigation. 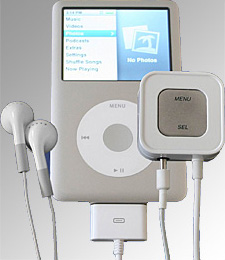 [ad#ad-taalz-inpost-right]The voice controller is attached via the iPod dock. It is activated when you say ‘iPod’ and then it would start taking commands from you. Its is trainable for other languages but it understands English language as default. With your voice commands it can play,pause,skip and pause what you are listening to. Its a very portable accessory and matches with the iPod and looks like a real part of it.It can be clipped to your shirt or hanged over your neck.The main objective for this accessory is to enhance the usability of the iPod, because many just don’t like moving their fingers or are just too lazy to do it.

The price for this cool ad-on is $79.95 and its really worth it. Whats better than just sitting back and giving commands after all 🙂