Steve Jobs, CEO of Apple launched the new product – A tablet PC called Apple iPad (which obviously is a funny name) on 27th January 2010. With a 1GHz processor and 9.7″ multi-touch screen users can enjoy the fantasy of iPhone and iPod on a bigger screen now. In addition to all the existing features and apps which work on iPod and iPhone, iPad has its own SDK too, which allow the developers to make their own new apps for iPad. Apple iPad has the former iTunes and iStore plus the new iBook app which allow the users to purchase books online and read them on their iPad. Here is the video of the keynote of Apple iPad:

END_OF_DOCUMENT_TOKEN_TO_BE_REPLACED

The most popular, and the most widely used online video sharing and viewing website YouTube owned by Google has introduced amazingly new features today at the start of year 2010. The old age of online streaming video has just passed away today with the new version of YouTube. The most prominent thing that is introduced is the High Definition video. Oh, not that previous ‘HD’ button. Now it has a new button – 360p – 480p – 720p and 1080p.

END_OF_DOCUMENT_TOKEN_TO_BE_REPLACED

Windows 7 the most awaited operating system and the proud statement rose again “I’m A PC”. Microsoft has struck hard and produced the best operating system after Windows XP. Microsoft says that Windows 7 will become more famous and more successful than Windows XP which is still the widely used operating system on a PC. According to the reporter of CNET, Microsoft emphasised more on their Windows 7 product during the launching ceremony as compared to the two years ago launch of Windows Vista. Here is the full keynote video of 22nd October 2009 Windows 7 Launch in New York City – USA.

END_OF_DOCUMENT_TOKEN_TO_BE_REPLACED

Microsoft is running towards new kind of technology during the last couple of years. As we have seen on last few conferences such as CES2009, that Microsoft had been showing off the new cloud computing technology again and again. Microsoft surface is what they are trying to promote and even had shown some demonstrations of it. ZDNETKorea recently produced a video which shows Microsoft technologies in the year 2019.

END_OF_DOCUMENT_TOKEN_TO_BE_REPLACED 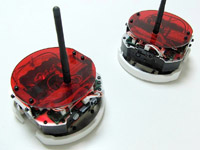 You may have noticed that the trend of small robots, to do regular small chores has increased. And there is no harm, with these useful robots coming out because its a reality that we are getting transformed into mechanical human beings as we need our work to be done with so many gadgets around us. Robo Engine has launched their new robot named as Pyuuun. This cute looking robot is very useful when you need simple things to be done for you. It can also blog and email which can be very useful, when you are not feeling good to make a blog post. Moreover, it can also serve you tea (video after the break).

END_OF_DOCUMENT_TOKEN_TO_BE_REPLACED

Gadgets come everyday, but the one which offers something different and with a new style remains in our minds. Samsung has introduced their new ‘point-and-shoot’ camera, which has a very retro appeal to it. There are two dials on the top of the camera, which display you battery and memory left and they look like the fuel display of cars. The cam looks overall very impressive and has some good features in it.

END_OF_DOCUMENT_TOKEN_TO_BE_REPLACED

Are you too lazy to use iPod’s navigation wheel? Then lets talk to your iPod. iPod is such a useful gadget and for sure its the most used out gadget to listen music. The touch wheel navigation of the iPod is surely a cool thing but sometimes you are just so lazy to do the moving or you may have something on, like gloves in a cold winter day. Accenda iPod voice controller is just the right accessory for those who want to use the iPod with ease by giving it voice commands. It is an add-on accessory for iPod which let you talk to your iPod to control the navigation.

END_OF_DOCUMENT_TOKEN_TO_BE_REPLACED

Portable Media Player (PMP) are really nice gadgets because you can see movies and play music/mp3/songs where ever you go. Teenagers mostly love these stuff, and that is why companies are now focusing on this target market. Philips introduced the new GoGear Ariaz PMP. The new PMP is all set to drive a good traffic toward itself, as there are plenty of nice new and cool features of it. Portable Mp3 and Portable Video Players are the gadgets which everyone will carry in the future all the time.

END_OF_DOCUMENT_TOKEN_TO_BE_REPLACED

Samsung is on a high with its new mobiles coming out.Mobile phones are now a complete accessory,which can do almost everything concerning your daily work like from making calls to listening music or videos or even full version of movies.Samsung now has officially announced its new mobile which has a DLP Pico Projector in it.he mobile would be called i7410 in Europe & W7900 in Korea.

END_OF_DOCUMENT_TOKEN_TO_BE_REPLACED

Compact and stylish gadgets always take one’s attention and i am not exception.Being a music and movies fan i am always hunting for the best gadget for my favorite past time activities.I got a hold of this new amazing Pocket Cinema gadget,which made me smile instantly.It help you play your movies from mobile or PSPs on screens.Other thank that the features it has really are the ones needed for a perfect portable movie gadget.