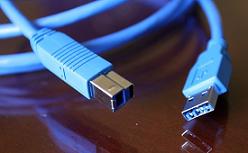 Los Angeles, November 9, 2008: For those of you unaware Microsoft’s talk last Thursday at the Windows Hardware Engineering Conference centered around the delays in the finalization of specifications of USB 3.0. The expected final specifications are to be announced in San Jose, Calif., on November 17.

Since the specs have not been finalized, there is no hardware support for USB 3.0, not even any prototype in the market as yet. However, the subject of the three year old development is expected to be 10 times faster than the current USB 2.0 – “In 2009, the signed-off spec will be handed over to the implementers and those adopters that plan to productize USB 3.0,” he said. “Our prediction tells us that in 2010 finally we’ll see broad-scale product deployment of host controllers, devices, and systems that are USB 3.0 and SuperSpeed capable.” Lars Giusti of Microsoft said in a WinHEC session here titled “USB Technology Update and Windows Strategy.”

Microsoft is currently trying to figure out the operating systems which will be USB 3.0 capable. It seems to be a difficult situation “Our early indications tell us that most partners think that we should support USB 3.0 on at least Windows Vista.”

USB 3.0 to be supported on Windows Vista at least

USB 3.0 to be supported on Windows Vista at least