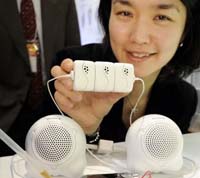 It looks like the world is becoming green day by day, as companies are coming up with different eco-friendly and green product ideas. Lately SONY Corporation showed unique power generation sources at the International Hydrogen and Fuel Cell Expo in Japan. It was a pleasant scene to watch cute looking devices and gadgets running on some strange power sources that we had never even imagined before. Soft drink and wind were used generate power to run a fan.

Masayo Endo was given the responsibility to display the bio-batteries. The batteries were in the shape of three cubes, and they were able to run a digital MP3 player and also two small sized speakers. 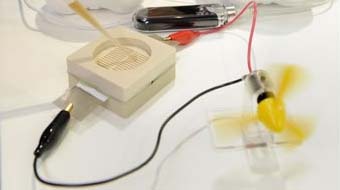 [ad#ad-taalz-inpost-right]The most interesting part to see was the fan, which was running with a soft drink and wind power that you can see in the picture above. Its such an amazing view to see such advancements and happenings taking place to make a much efficient green environment.

SONY is working now-a-days to make things green along with other companies. They now have developed a  passive type bio battery system which breaks down  sugar to generate the world’s highest level electric power of 70mW from a cell.