UK’s cellular company Three ‘3’ summer lineup road-map got leaked and was captured by Engadget. Everyone was waiting for the bigger Samsung Galaxy S2 but we have some new things coming this April. The mini version of Galaxy S2 which is not actually mini. Loaded with Android Gingerbread and 1.4Ghz Processor, I can’t say its mini.

The specification that came out according to Three were: 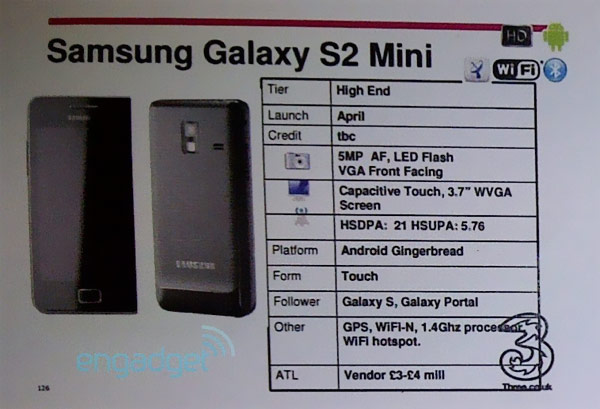 [ad#ad-taalz-inpost-left]The unknown factors of this so called mini Samsung Galaxy S2 are the RAM, video camera quality and most importantly the type of screen. I hope this handset also have the Super AMOLED too which brings a huge difference in the screen resolution and sharpness of the mobile phone screen. 3.7″ screen size is not that bad and the 5 mega pixel camera also has the LED flash light which is obviously a great improvement from Galaxy S.