Last week the world’s biggest and most popular file sharing service website Megaupload.com was blocked and seized by FBI because of the anti-piracy law. Just a day after SOPA and PIPA were withdrawn megaupload was seized by FBI on somewhat same basis what SOPA was claiming. Just few minutes ago,  second most popular file hosting website, filesonic shutdown and disabled their file sharing functionality

Filesonic.com is a popular file sharing service, which just few minutes ago disabled their functionality of file sharing. If you are not able to download any file from a filesonic link, you don’t need to worry. There is a new notice on the website saying:

All sharing functionality on FileSonic is now disabled. Our service can only be used to upload and retrieve files that you have uploaded personally. 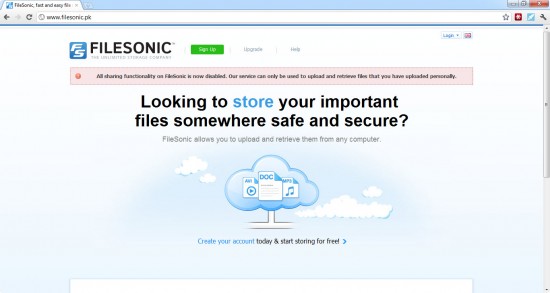 It looks like Filesonic would have been threatened by FBI exactly the same way as Megaupload.com was. So now after this newly announcement by FileSonic only the files that you have uploaded personally will be downloaded by your own self. Eventually, FileSonic is going to become something like Dropbox and other personal data backup services. Few days back, FileServe.com another file sharing website also disabled member accounts in a huge number who were uploading files and earning money from the downloads.

I am not sure what happened with FileSonic.com yet. My assumption is that they might be threatened by FBI too with the Anti-Privacy Act. We will keep you updated with the new development on the filesonic shutdown and other major file sharing websites. Stay tuned with us.

Filesonic Shutdown & Disabled. Has FBI Threatened Them Like Megaupload?

5 thoughts on “Filesonic Shutdown & Disabled. Has FBI Threatened Them Like Megaupload?”