Google yesterday released the Pre-Beta of the new version of their web browser Google Chrome 2.0. People are still curious to know that how they can try out this new Google Chrome 2.0 Beta because alot of new features are introduced in this new version. Google is trying hard and their team is working endless nights to come up with new ideas for their web browser. Its not even been 200 days since the launch of their Google Chrome and they just came up with the version 2.0 beta.

Here is a guide on how you can install/update to Google Chrome 2.0 Beta:

Note: “The Dev channel is where ideas get tested (and sometimes fail). The Dev channel can be very unstable at times, and new features usually require some manual configuration to be enabled. Still, simply using Dev channel releases is an easy (practically zero-effort) way for anyone to help improve Google Chrome.” 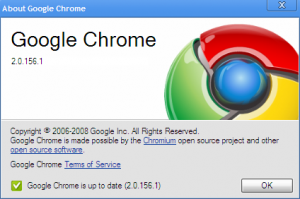 How to Uninstall Google Chrome 2.0 Beta

If you decide to switch from Dev to Beta or from Beta to Stable, the new channel will be on an earlier version of Google Chrome. You won’t get automatic updates on that channel until it reaches a version later than what you’re already running.
You can uninstall Google Chrome and re-install from http://www.google.com/chrome to go back to an earlier version. (If you want to be on the Beta channel, you have to run the channel changer again after re-installing).
If you re-install an older version, you might find that your profile is not compatible (because the data formats changed in the newer version you had been running). You’ll have to delete your profile data. Delete the User Data\Default folder (see the Before You Change Channels section above for the location).  If you made a back up of your Default directory, you can then rename it  to Default so that you at least restore some of your previous bookmarks, most visited pages, etc.

How to Install Google Chrome 2.0 Beta

How to Install Google Chrome 2.0 Beta