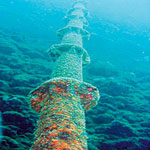 On Friday, the underwater optic fibre cable connecting Asia with Europe and US was cut down at the Mediterranean Sea. This is the second time in the year that this cable was damaged. As a result most of the Middle Eastern countries including – United Arab Emirates, Egypt, Jordan, Pakistan, Sudan, Yemen; were knocked out from Internet access.

It seems like a habit in the Middle East of cutting the main Internet optic fibre link cable now. This happened the second time in that same particular region, resulting in the disconnection of Internet service in the major Asian countries. Because of this the Internet Service Providers had to shift to the alternative sources like satellite and other access points in Asia which made the Internet speed slow.

A robot submarine “Hector” to search the damaged part of the fibre optic is supposed to reach at the suspected area near south of Sicily. Hector is owned by the France Telecom.

“We have to fix the cable fiber by fiber, and it’s a very huge cable,” Aymard said. He said the company hopes to have the first line fixed by Thursday. The cable has to be pulled up to the surface of the sea and repaired on deck. The third cable “I-ME-WE” (India, Middle East, Western Europe) is owned by Reliance Globalcom, connecting nine telecom partners – Bharti Airtel (India), Etisalat (UAE), France Telecom (France), Ogero (Lebanon), PTCL (Pakistan), STC (Saudi Arabia), TE (Egypt), TIS Sparkle (Italy) and VSNL (India).

Instead of using the Satellite system a better and faster communication medium of Optic Fibre was used to connect countries with each other. The Satellite system’s ping reply time varies from 1.2seconds to 1.8seconds, whereas the ping reply time of optic fibre system is around 400milliseconds. The “I-ME-WE” which is the third undersea cable can transfer data upto 3.84terabytes per second and covers 14,000km distance. There are already four existing cables connecting this region which is named as “SE-ME-WE-1”, “SE-ME-WE-2”, “SE-ME-WE-3” and “SE-ME-WE-4” (South East, Middle East, Wester Europe).