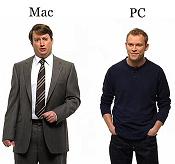 Since a very long time Apple Mac had been hitting on PC with different kind of weird ad commercials across the globe and had been degrading the PC users. Finally Microsoft is back in action and started a new campaign with “I’m a PC”.  PC users were always degraded by the Mac users and there are series of ads made by people about the I’m a PC / I’m a Mac. You can find all those I’m a PC I’m a Mac ads on YouTube.

But now we have the I’m a PC ad which is going to put smiles on the PC users. Microsoft targeted the ad with the financial things. If you have $1000 you can buy a Laptop with Microsoft Windows on it, but you cannot buy a Mac Apple Book with just $1000 in hand. You need to at least double your budget to buy that.

So I guess after watching this Ad PC users are delightful and are cheering up.