Most of the readers here must have read by now that Mark Zuckerberg, 26 years old CEO of Facebook has recently announced donation of $100million to Newark Schools in a bold bid. The purpose of this donation quoted at various sources was to improve the worst performance of public school systems in US.

END_OF_DOCUMENT_TOKEN_TO_BE_REPLACED

On 19th May 2010, Pakistani government got active against the drawings of Muslims last prophet Muhammad (pbuh) over the Internet. Molly Norris initially started this issue and Muslims were already angry at the Danish cartoonist who drew photos of Muhammad (pbuh) and later the very famous cartoon series South Park targeted the hearts of Muslims around the world.

END_OF_DOCUMENT_TOKEN_TO_BE_REPLACED

Few days back facebook (as usual) changed their main home page interface again. People are really hating facebook for this change again. When the users become used to of some interface, Facebook changes it again. These rapid changes are not liked by people. Recently the main page is changed and facebook introduced two quite complex things “News Feed” and “Live Feed“. 95% of the people are still not aware them that what are the differences in both these feeds.

END_OF_DOCUMENT_TOKEN_TO_BE_REPLACED

Recently Yahoo.com announced a newer version of their homepage. The new version of the Yahoo homepage is much more interactive, flexible and easy to use. I always had a problem bookmarking or make any page as a homepage of my browser. I mean usually Live.com (formally MSN.com) or Yahoo, or Facebook or Orkut, and so on.. there were so many website which had that button of “Make it your Homepage”, but I never cared because there was nothing of my interest in there.

END_OF_DOCUMENT_TOKEN_TO_BE_REPLACED

Recently in this week facebook brought a major change in the interface of the home, profile and pages design. At the very first sight I liked it, but later after using it for half an hour I realized it sucks big time. This is the third time facebook has changed its interface. The previous one was way cool and people liked it, on the hand people started to get along with it. But this new one, first you have to look where the things are now. There are alot of things missing in this new interface of facebook which made its repute the worst.

END_OF_DOCUMENT_TOKEN_TO_BE_REPLACED

After the Facebook spam attack today which approximately took over 5million profiles in a single day, now facebook is asking for help. Help not for spam actually! Facebook is asking it’s users to help them in translating the facebook interface in different languages. Few hours ago there was a notice on the “home” page of my facebook profile, in I was notified that I can now select my local language for the facebook. Now couple of hours later, the notice has been changed.

END_OF_DOCUMENT_TOKEN_TO_BE_REPLACED 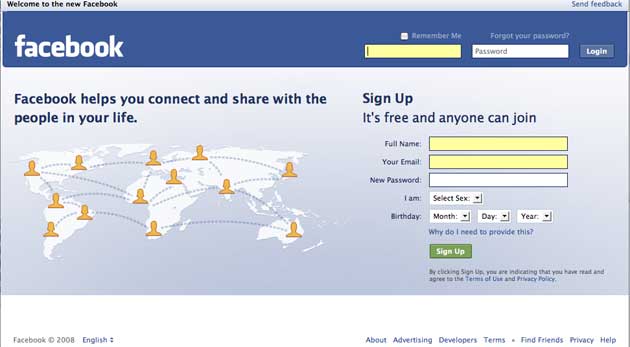 Facebook launched more than a new iPhone app this evening – they also have a new home page (the page you see when you aren’t logged in) and a new tagline. Gone is all the descriptive language suggesting you sign up to “Keep up with friends and family,” “Share photos and videos,” “Control privacy online,” and “Reconnect with old classmates.” Now Facebook has a simple message to entice you to sign up: “Facebook helps you connect and share with the people in your life.”